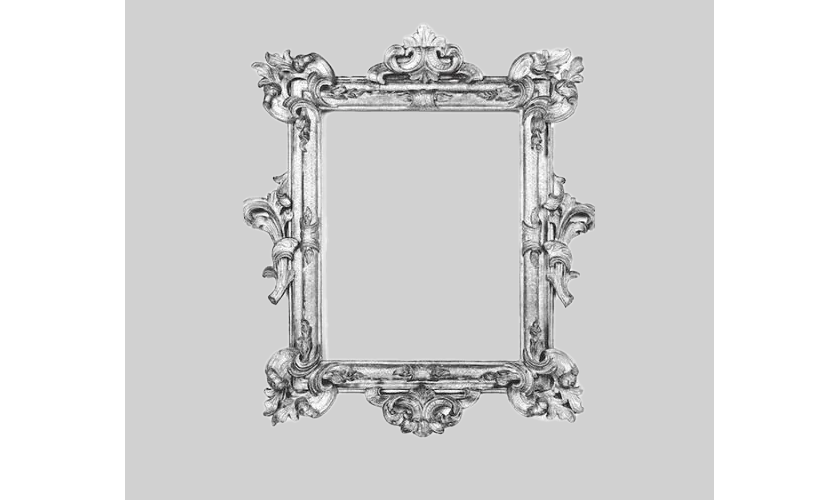 Like most things artistic, custom art frames go through creative phases, chapters, trends. Since the concept of framing art was first conceived, trends in framing and frames – whether they be metal frames or wood frames – have been prompted by the artistic, social, and economic movements of the times.

The beginning: art and frame, one and the same

The earliest art frames were built right into and part of the artwork. They were from the same piece of wood, a material that predated canvas, as the art itself. They were simple and minimally ornate, if at all. Some artisans used mortise-and-tenon joints, a technique still used today, to connect wood pieces.

The Renaissance of frame bling

More elaborate frames were created during the Renaissance, when Italian masters like da Vinci, Michelangelo, and Botticelli were producing some of the greatest works of art ever. Frames of the day were decorated with precious metals, stones, ivory, pearls, or with veneers of tortoiseshell. Walnut was the favored wood because of its rich brown color, and because carving it into frames was easy.

Two from the Renaissance

Here are two frame styles that originated during the Renaissance:

Tabernacle frame: This style of frame is designed to look like a building, with an ornate top and base and with both sides supported by pillars. The tabernacle frame was intended to fit flawlessly within window treatments and door frames in classic Greek and Roman style.

Cassetta frame: This is a simple box-like frame (cassetta means "little box") left natural, or finished in gold or with paint. It featured a flat central frieze.

Typically, art created in the Baroque period (1600 to 1750 A.D.) was ornate and bold, and so were the picture frames. They were dramatically elaborate, with plenty of detail and ornamentation. Massive gilded frames were also popular.

The rise of the middle class

During the Victorian Age, the trend in frame design was simplicity. At the time, a middle class was developing, so more and more people were able to afford artwork and the frames they came in. Frames had to be made cheaper and more efficiently, to satisfy the greater demand and the limited budget of the burgeoning new audience. Simpler frames fit the bill.

Also during this time, a mixture of mortar and plaster called “compo,” or composition, became a popular material in framing, especially as an alternative to time-consuming and expensive wood-carved ornamentation. Compo is a durable casting material that’s easily molded and can be added to a basic wood frame to provide detail and definition.
With the rise of compo, the popularity of wood frames waned. Intricate molds were used instead of the handiwork of carvers to embellish a frame’s design.

In the 1970s, posters were an immensely popular form of art. Museum exhibits, rock concerts, and movies were just some of the pop art subjects posters featured.  Poster frames were usually metal and were of simple design so as not to upstage the graphic art held within it.
In the 1980s, scenes of nature were the rage, including works by painters like Thomas Kinkade. With brightly toned details often included in these images, frames with mauves and aquas were used to highlight the bright colors.
In the 1990s, French posters with more elaborate frames rose in popularity.

Today, there’s great demand  for prints with oversized mat borders, a highly effective way to occupy a significant space on a large wall. Wide mats guide the viewer’s eye into the artwork. This more sophisticated look strengthens the impact of smaller works of art.

Shadow-box frames are extra deep and have plenty of space between the artwork and acrylic/glazing. The inside and sides of the frame are lined with mat board, usually a linen that’s pure white, off-white, or black. This gives a gallery-like effect to the presentation of artwork, photographs and mementos.

Canvas float frames create the illusion that the artwork or photography is hovering within the frame, above the mat. The shadow created underneath the art provides extra drama. Float mounting is great in emphasizing the character of papers with a deckled edge.

As one of the leading sources of art frames online, we at American Frame have watched trends rise, only to be replaced years or decades later by a new trend. Today, our selection of products – frames as well as supportive elements – is vast. Here are a few of our “trendiest” product categories.

Our wood frames include solid woods like ash, cherry, maple, oak, and walnut. With these “natural” frames, the defining characteristics of each wood species – grain, knots, tone – means every frame is slightly different from the next. See them here:

Our linen mat boards add depth and texture to frame treatments:
Canvas float frames create a strong visual, with the stretched canvas appearing to float within the frame.