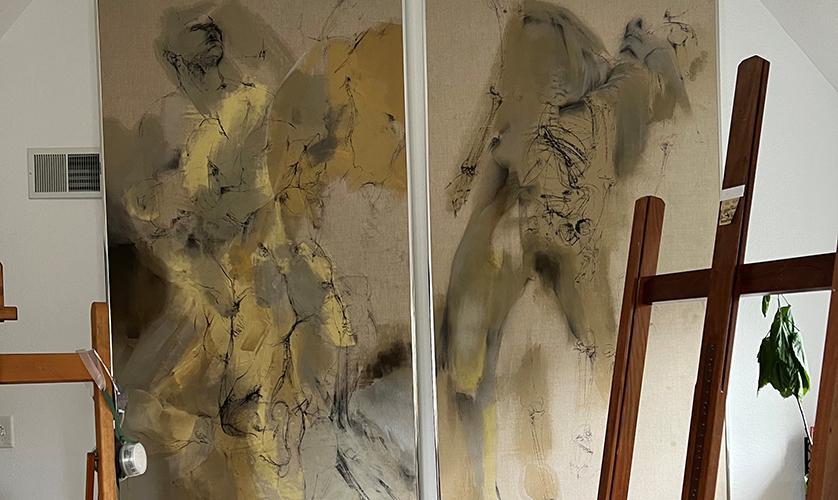 “A work of art is as inexplicable to me as a working relationship. How it came to be is a mystery to me , but I enjoy its presence. The process of work is a stimulating conversation between me and what occurs on the drawing surface. There is no chatter – attention and involvement are paramount. I control the process but I do not direct it. I must leave myself open to the voice.” - Elaine Mickel

In celebration of Mother’s Day, we (Laura and Dana, second-generation owners of American Frame) sat down with our mom, Elaine Mickel—artist, teacher, former gallery director and co-founder of ASF Sales (later to become the company we are today)—to talk about her life in the arts. We’re sharing this special kitchen table Q&A with you, our extended American Frame family and art community.

Q: Mom, what inspired you to start drawing?

Drawing on a daily basis was simply part of my life, as far back as I can remember. Our kitchen table was a drawing table; it was shiny, perhaps lacquered, and we would sit and draw directly onto it—no paper, just pencil on the table, while Mother ironed. She had an ironing board that came down from the wall like a Murphy bed, and that was our daily routine.

My older sister, Joan, would draw a scene on the table and then have me draw in the details. My brother, Frank, was quite an artist too; he could draw anything. My other sister, Alyce, went on to become a fine commercial artist in the advertising world.

Once I got into grade school, I was considered an artist. In the first grade, I did a large mural of the Virgin Mary, all in pastel. The nuns took me out of class to do this, so I really didn’t learn math and other things I was supposed to at that time. There are no pictures—it’s all in my memory. There was another project they had me do in third grade on rolled kraft paper covering an entire classroom blackboard. I was tasked with an art project during and after school, becoming a muralist at a very young age. My parents never encouraged it, but the school wanted to show off my skills as an indication of how great their art department was for their “May Shows.”

By the time I reached high school, I started in a completely different direction—took off totally on my own. I remember my first strong drawing of a man throwing a discus, incorporating athleticism with my art. Athletics were especially important in my family, and I loved drawing muscle. This particular drawing was inspired by a statue at the Toledo Museum. I created a big black-and-white drawing, about 4.5’ x 2.5’. It stood out. I went to Central Catholic High School, and since it was a strong nude, no one there wanted to hang it—except for one Ursuline nun who said, “I’ll hang it.” So it was exhibited in her home room. I cannot remember her name, but she was a huge fan of mine. It is funny looking back. Everyone hated this nun; she was strict. Strict is good.

Q: You have a long relationship with pencil and pastel as media. What keeps you working in those media?

I liked charcoal and pastel because I liked to blend it.

I found drawing foundational. I did paint, and I was not fond of it. It was restrictive to me because I really didn’t know how to handle it.

In undergrad, I was not allowed to study art, but I did it as an elective class. It was the only thing I found interesting at school (besides Leroy’s Bar on campus). So, I would head to the museum after half a day at school, three days a week. The director at the time, Otto Whitman, gave me a huge vote of confidence and was very encouraging. He really liked my work.

Q: We remember that, as kids, we had a big fireplace in our house in South Toledo and you experimented with oil paints and turpentine, and blended paints with rags as well as brushes. Then shortly after, you and Dad opened the hardware store, then frame shop and gallery. What is your greatest memory of that time?

We opened the gallery partly to attract people into our frame shop. We had all kinds of room, so he wanted me to do something to fill it. Your dad gave me the space, and I started asking people I knew to come in to hang things—and the gallery evolved. We had to make it look “arty” and interesting. We attracted some really fine artists and teachers I got to know through my studies and by sitting in on classes offered through the museum. Then we became the first modern art gallery in Northwest Ohio, the Ron Mickel Gallery. It was an exciting time. We showed a lot of high-caliber work.

I will never forget how proud I was of this one particular piece: It looked like a huge shell in black and gold. I do not know the name of it, and I cannot remember the name of the artist, but it was just a magnificent piece. And I was so proud that the artist let me show it.

Q: Tell us how the metal frame thing started.

I loved the simplicity. Your dad started cutting them, and I started using them. It was a moment where people were ready to use something new and move past the big wooden frame look. They were a hit with the artists in our community and then nationally. It was exciting.

Q: So, you raised your kids, you launched a few art businesses and then you went back to get your master's degree. What moved you to do that?

Running the gallery with your dad, I had formed quite a few strong relationships with fine artists—many university professors—who encouraged me, the most important being Tom Hilty (former Director of Art, Bowling Green State University).

Dana: I was in high school at the time. I remember you going back and forth to Bowling Green.

With the decision to go back to school, getting my master’s was not the focus. I really wanted to learn the skills, so I started by auditing classes. The degree came later. I thought it would open doors, but as it turned out, I didn’t need more open doors. It was stressful. Lots of work. Hilty was a task master, and I was pushed to do the work. My other friend, Bob Mazur (former Director of Painting, Bowling Green State University), on the other hand, made it fun. But I received a lot of encouragement. I did it because it meant something to me.

I loved to make. I loved the community. I lost the drive to sell. Then eventually, I just stopped making.

Dana & Laura: We’re going to showcase some of your signature pieces in this article. Happy Mother’s Day! We are two proud daughters!

“He and She”: Charcoal and oil on canvas. “Best of Show,” Toledo Museum of Art Area Artists’ Show, I believe it was 1985.

“Chairs”: “Best Painting” as judged by internationally renowned painter Philip Pearlstein. I believe it was the following year after the “Best of Show” award at the museum. He tried to help me promote my work and travel, but I was never interested in that.

“Prime Movers”: Charcoal and pastel, c. 1983. Laura’s story: In my first quarter at Ohio State, I took a class on the history of modern dance. When I was done with the class, Mom asked if she could draw from one of the textbooks. Here, the cover and then the drawing, which hangs in my home office today.

Laura’s story: When I was living in Chicago, Mom and her boyfriend were visiting and all decked out for a day in the city—Mom all glamourous in her fur. As they descended the stairs, the pelt slipped off her shoulder, and he stepped on it, effectively cutting it in half. This was the 90s, when animal activists were throwing paint on people who wore fur coats. I said, “Mom, you shouldn’t be wearing that stuff anyways,” and she said, “You’re right. I’ll draw it instead.” From there, a series was inspired.