David FitzSimmons is a learned man.

His dad was a science teacher and his mother taught elementary school English in rural central Ohio, near Mansfield, where David grew up and his studio is now located. David holds a PhD in English from Ohio State. His doctorate thesis was on the writings of William Faulkner. Before becoming a full-time photographer and author, he taught for 20 years, first as a high school English teacher, then as a professor at Ohio State and Cornell and as a tenured professor at Ashland University.

We interviewed David in July 2020.

American Frame: How did you first get into photography?

David FitzSimmons: My grandfather and father were avid photographers, though they weren’t  professionals. As a child, I was given an Argus C3, which was an all-mechanical camera with screw-on lenses. It was perfect for learning photography. It’s not like today’s cameras, which you just push a button and shoot. With the C3, you had to study the light, and adjust accordingly. It didn’t even have a light meter. I did all kinds of manual exposures and double exposures, and I learned how to manipulate light. 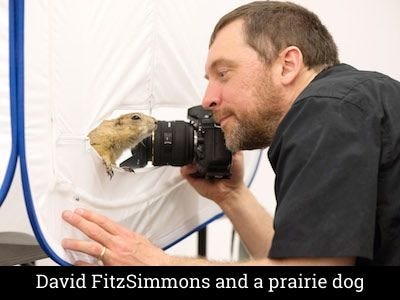 American Frame: What did you photograph?

David FitzSimmons: Our family would load up the station wagon with a tent or a little pop-up camper and travel, sometimes for a month. I’ve visited almost every state and the majority of the national parks. I shot everywhere..the Grand Canyon, Mt. Rainer, on trips to Maine, the Smoky Mountains.

American Frame: What were the favorite photos you took?

David FitzSimmons: I love the shot of the Cape Meares lighthouse in Oregon. There was a picture of a seagull silhouetted against a sunset I took in northern California. In Glacier National Park, I was hiking across a trail and came across a mountain goat standing on a rocky ledge framed by a glacial lake and the mountains behind it. That was one of my favorites.

American Frame: When did your interest in photography get serious?

David FitzSimmons: In high school, I was really interested in computer programming and IT. Then about 2000, all my interests – art, photography and computers – came together when I bought my first digital camera. That made all the difference in the world.

American Frame: Where does your passion for animals come from?

David FitzSimmons: In the late ‘60s, when my dad was just out of college, he drove a science mobile, which was essentially a traveling museum. Then, he started an outdoor education program, sort of like Outward Bound. It was environmental education that brought inner-city kids and suburban kids together. He called it the “outdoor human relations program.” He’d show kids how to canoe, bird watch, cross country ski. He also kept animals. Many inner-city kids never had the chance to handle a snake or see a box turtle. So our house had animals besides the family dogs and cat, snakes, various reptiles, and salamanders. I became very familiar, very comfortable with animals.

American Frame: Where did the idea for “Curious Critters” come from?

David FitzSimmons: The late Dave Metz was with the Sigma camera lens company. He managed a stable of phenomenal photographers. For 10 years, he was my mentor. When I was working on a book for Kent State University Press called Animals of Ohio’s Ponds and Pools, he suggested the “Curious Critters” series. I was researching and writing about salamanders, frogs, insects, and other animals that live in temporary wetlands. Dave said, why don’t you take some of those animals and put them in a light tent – like a product photography white box – and photograph them against a white background? I gave it a shot and it took off from there. As soon as Dave and I looked at those pictures, we said there’s a whole lot more we can do with these.

David FitzSimmons: I want to celebrate the common animals. The books get children and their parents and grandparents interested in what’s right behind their houses. I’m not focused on exotic animals. I believe the core of environmentalism is getting kids interested in and loving nature. Then later in life, they’ll protect it.

American Frame: When did the first “Curious Critters” book come out?

David FitzSimmons: About 10 years ago, in 2010. It sold out in about four months. There are now 23 books in the series. I quit my position as a tenured professor at Ashland University to do this full time.

American Frame: How many copies do your books sell?

David FitzSimmons: About a quarter million. The first book sold over 100,000. It’s now in its fourth printing. Several books have been licensed to Scholastic (the world’s largest publisher and distributor of children’s books).

American Frame: How many US state editions are there now?

David FitzSimmons: Sixteen. The Ohio, Michigan, Texas, Florida and Maine versions are the most popular.

David FitzSimmons: There’s a book called Last Child in the Woods: Saving Our Children From Nature-Deficit Disorder by Richard Louv. (According to the book jacket, it “investigates the relationship of children and the natural world in current and historical contexts.”) Research shows that the more contact children and adults have with nature – in particular, with animals – the more well-adjusted and relaxed they are. Less anxiety, depression, sickness, obesity. A step in the right direction can be as simple as having a view out your window. Dentists offices are now putting up pictures of forests for this very reason. My work with the “Critters” books is strongly rooted in that “ethical entrepreneurism” approach. I’m trying to do business that’s sustainable. I hope to make enough money to sustain my business and family and do something that’s helping the world in some way. My work is an attempt to try to increase people’s interest in, connection to, and hopefully preservation of, the natural world.

Everybody loves animals. It seems to be hard-wired into all of us. That’s no surprise. We know that kids love animals. When I speak before groups, I try to encourage my audiences—children and adults—to connect with nature. I’m trying to do something to help the world.

American Frame: How does your education impact your career as a photographer?

David FitzSimmons: I write as if the animals are speaking to the kids. Instead of esoteric factual information, I create first-person narratives with the animals. Each animal narrative focuses on one science education standard to make it easier for teachers or librarians to integrate the work into their curriculum. 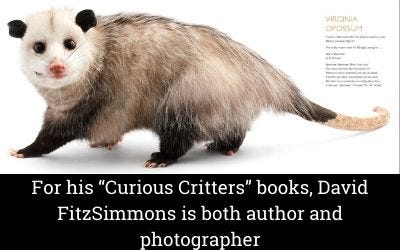 David FitzSimmons: For two decades or more. In 2005, I organized a traveling exhibit of Ohio nature photographers, the top names in Ohio. Six photographers, eight pieces each. For that exhibit, I used some very nice hard wood frames—very classy. Subsequent to that, the “Curious Critters” exhibit took off. At one point, we had four traveling exhibits. We had many of the photos printed on metal sheets—using the aluminum printing process—and we would use the metal frames as stand offs on the back. We use a Nielsen aluminum frame on the back. They are so easy to put together. And we could make two sizes to nest the prints inside each other. These exhibits traveled all over the United States. Now, we do the art festivals and art fairs. I use various colored metal frames for this.

Overall, I believe that American Frame is an exceptional company. They provide high-quality products in an extremely efficient manner, whether through their website or via call-in orders. Quick delivery and easy assembly. The American Frame kits can be put together by anyone, and they look very professional. I might add that what originally brought me to American Frame is how all of this is so reasonably priced.

American Frame: Do you have a favorite frame? 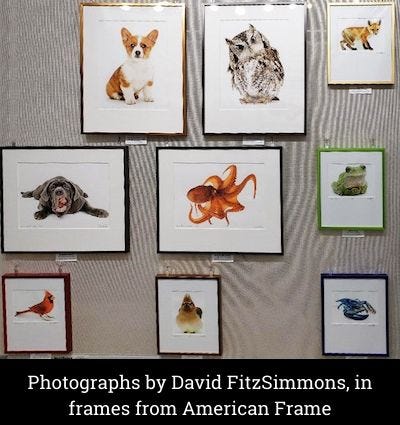 David FitzSimmons: I really like the Nielsen aluminum frames. They come in great colors and contours, and they are quite durable. I’m also partial to American Frame’s classic hardwood frames.

And around 50 percent of the people who read this may be wondering, ““Will we see ‘Curious Critters Cats?’” Well, stay tuned.

You can learn more about David FitzSimmons by visiting his website here.